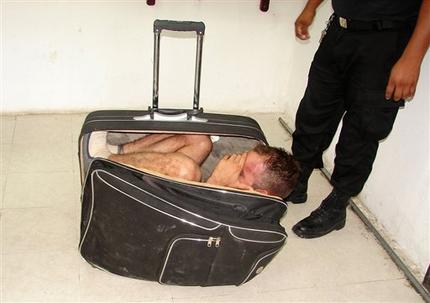 In this photo taken Saturday, July 2, 2011, prison inmate Juan Ramirez Tijerina is curled inside a suitcase (looking embarrassed) after he tried to escape from prison with the help of his girlfriend following a conjugal visit in Chetumal, Mexico. Ramirez is (still) serving a 20-year sentence for a 2007 conviction for illegal weapons possession.

A spokesman for police in the Caribbean state of Quintana Roo says staff at the prison in Chetumal noticed that the woman seemed nervous and was pulling a black, wheeled suitcase that looked kinda bulky. via